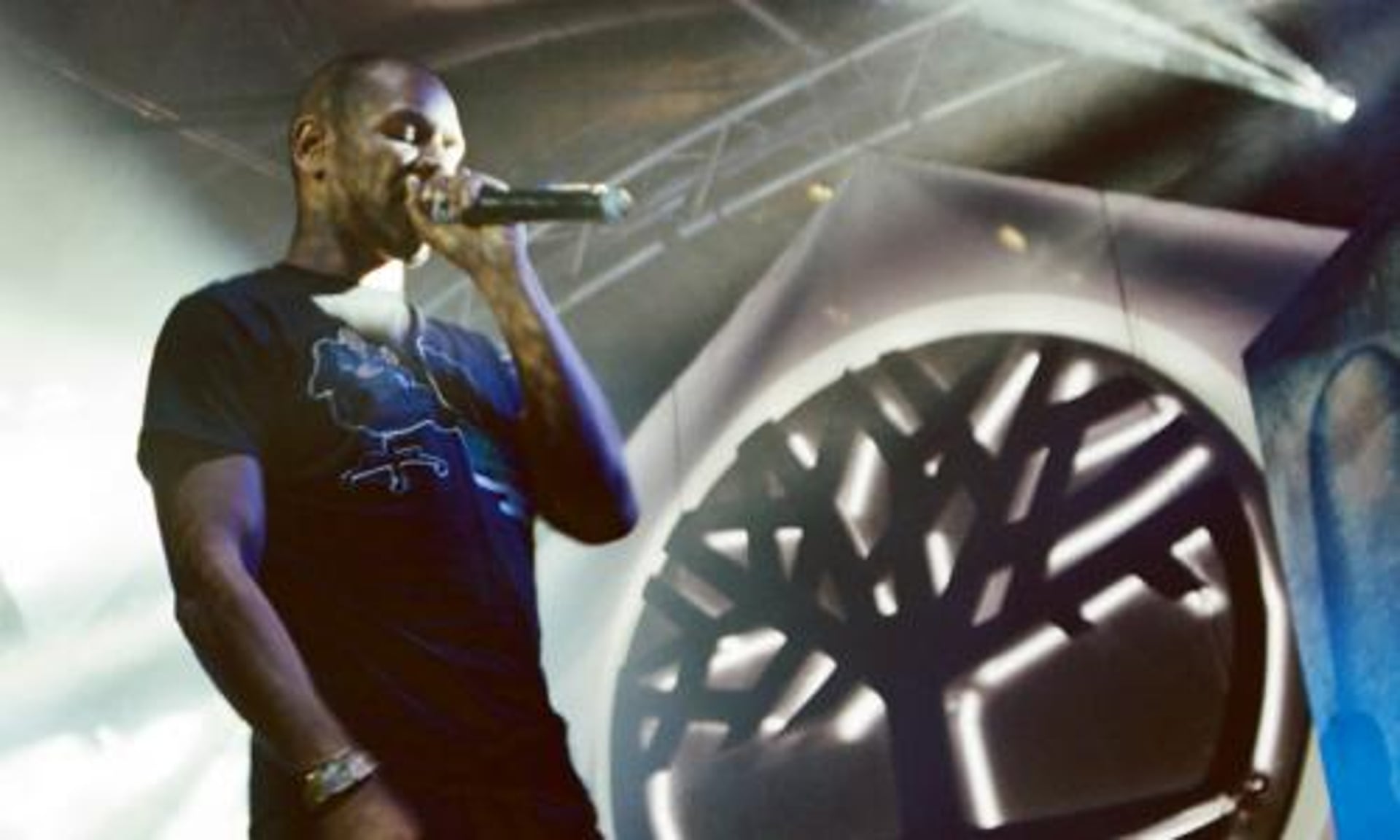 Timberland hosts rap gigs. Princess Nokia makes films for Maybelline. And Red Bull is the new school of rock. Have brand partnerships destroyed counterculture? Or are they all that’s keeping it alive?

Is it possible, in 2017, to sell out? Not so long ago, cosying up to big business was considered the gravest sin an underground artist could commit – but these days new and leftfield musicians seem to spend their days hoovering up cash provided by brands while fans barely bat an eyelid. It’s not simply a case of moral bankruptcy, but rather literal bankruptcy: new and independent artists have had their potential income slashed by streaming and have been forced to mine money from an alternative source. But what’s in it for the brands – why have massive companies like Budweiser, Versace and Adidas invaded the alternative music scene? And can an underground even exist when so many of its artists are in cahoots with multinationals?

It’s true that corporations and musicians have been shacking up together for decades – since the Vans Warped tour began in the mid-90s, even anti-establishment punk types have been in bed with them. But over the past decade companies have descended on musicians more zealously than ever. “There’s a real demand for authenticity at the moment,” explains Jamie Brett from Youth Club, a not-for-profit organisation dedicated to archiving youth culture. “So I think brands are more keen than ever to reconnect with their subcultural heritage – if they have any – or try to forge some subcultural anchoring if they don’t”.

In other words, in order to cut through the onslaught of obvious online advertising, companies are attempting to siphon off some of the exciting cool that alternative music radiates by posing as tastemakers and champions of the underground. In the past few months alone, that’s resulted in shoemaker Timberland hosting a grime gig; Brooklyn rockers Public Access TV modelling for Levi’s; Skepta teaming up with Rolls-Royce; Bang & Olufsen sponsoring a show by renegade artist Dean Blunt; leftfield pop band Rhythm Method playing at a Topman fashion show and rising rapper Princess Nokia starring in a short film for Maybelline.

This quest for credibility in a world of stealth advertising can also look bewilderingly philanthropic. Why, for instance, has Red Bull been funding Red Bull Music Academy, an organisation – not particularly famous outside of hipster circles – that hosts lectures, gigs and workshops and supports hyperlocal scenes, for two decades? A slight increase in positive associations with its taurine cocktail, presumably, but the decision doesn’t scream business nous.

The financial nonsense of the project, however, only adds to the impression it is motivated by genuine enthusiasm for culture, something brands are desperate to cultivate. “Red Bull is not in the world of music to make money off music,” says RBMA co-founder Many Ameri. “We are entering this with no need to make everything work financially – we can focus on presenting things that are interesting and use that freedom.” It is true that Red Bull has little commercial stake in the music its endeavours produce and support; while record companies encourage commercial success, brands aren’t looking to recoup in that straightforward sense. It’s easy to understand why an independent artist like rapper Little Simz would describe Red Bull, which allowed her to record her debut album for free in its studios, as “very kind”. It may sound naive, but Little Simz’s claim that the drinks giant let her retain full artistic control – there was “no interfering with the music at all” she told the Guardian at the time – is a genuine reflection of how many artist/brand partnerships work.

Little Simz’s association with Red Bull didn’t lead to overexposure – in fact, her album failed to chart. Other kinds of collaborations, such as gig sponsorships, or musicians modelling for brands, are usually small-scale and high turnover – meaning that brand partnerships do not tend to give alternative artists such huge amounts of publicity they no longer qualify as underground; often the musicians will merely receive a modest bump in social media followers in addition to their fee. It’s not even in the brand’s interest to make the artist famous.

Collaborating with more obscure musicians, says Steven Appleyard of Boiler Room, a streaming site that hosts events worldwide with underground musicians from Hudson Mohawke to Nina Kraviz, ensures the brand doesn’t get overshadowed by its artist associates. “Working with top 10 artists can be a bit of a false economy,” he explains, “because the awareness and engagement that the brand gets off the back of it is kind of transient.”

From a certain angle it looks like brand partnerships are the only thing perpetuating underground music. “If you’ve got some batshit-crazy idea, your avenues towards getting that idea brought to life are limited,” says Appleyard. “Unless there’s an obvious commercial kickback through record sales, it’s doubtful that your record label’s going to back it.” Yet in exchange for some associative “vibes”, a brand might.

Brand collaborations also prop up Boiler Room, which began in 2010 as a way to broadcast the London bass scene. Like NTS – an online radio station that broadcasts alternative music, and is funded by brands such as Uniqlo, Carhartt and Drambuie – Boiler Room’s content is free in order to compete with the rest of the internet. “Right from the very start we did partnerships with brands,” says Appleyard. “It was the only way we were able to exist.” Brands are paying to appropriate the cutting-edge sensibilities of these platforms, but they will normally also have input into the content they fund.

“Of course Boiler Room has more in-depth knowledge when it comes to the right artists,” says Sascha Cordes from Budweiser, which sponsors numerous Boiler Room events. “But we will sit together to figure out from the bigger pool of preselected [artists] what is the best lineup – what fits the story of Budweiser in London.” It’s a narrative that’s officially based around the beer’s amusingly strident slogan – Budweiser is “brewed on its own terms, for people who live on their own terms” – but the brand is clearly more focused on mood than the sound of the music. Cordes seems to be especially keen to associate with “euphoria”, explaining Budweiser is not interested in “one specific genre, it’s really about the energy”.

Those sorts of values are arbitrary enough to be largely meaningless – but because brands aren’t particularly interested in the music itself, there can be other, more insidious factors at play when they decide which artists to promote. Rina Sawayama is an unsigned, self-funded musician who makes leftfield pop, and says brand partnerships have been crucial to her existence as an artist. She featured in the recent Versace Versus campaign alongside rapper Tommy Genesis and singer Cosmo Pyke among others – and appreciates that her striking look is what makes brands keen to work with her. “I’m very aware that [these collaborations] come with the privilege of brands thinking you’re good-looking enough,” she says. “I’m under no illusion that when we turn up to these jobs that, of course we’re artists, but also we possess the look that they want.” In these scenarios, alternative musicians are being vetted for attractiveness before they are given the means to make music – presumably the Falls and Pogues of tomorrow are being starved out of the industry as we speak.

Superficiality aside, the commodification of counterculture seems like less of a problem when anti-consumerism is no longer a major tenet of the underground (the free party scene excluded). Representation and identity politics are instead the causes du jour, and, theoretically, commercialism is not anathema to social justice – it can even help spread the word. Indeed, brands often attach themselves to political crusades via a softening musical filter, as proven by Smirnoff’s recent Equalizing Music campaign – which aims to double the number of female festival headliners by 2020 – or Timberland’s grime gig – timed to coincide with the review of the 696 risk assessment form that has been accused of unfairly discriminating against black musicians.

Yet as keen as they are to appropriate these causes, controversies in other industries have proven that brands behave conservatively despite outward appearances. The case of Monroe Bergdorf, the transgender model whose comments on racism led to her being fired from a L’Oréal campaign, is proof that brands are not always prepared to tolerate controversial views or ideas – for artists not wanting to bite the hand that feeds, this could result in a kind of implied censorship against provocative music.

The general message from the industry seems to be that brand partnerships must be vetted closely – any relationship that seems too incongruous or clunky could still turn people off. The music world has learned from misdemeanours such as U2’s infamous partnership with Apple – which saw their 2014 album Songs of Innocence clog up the iTunes of 500m people; and Alicia Keys’ collaboration with BlackBerry – which she slightly undermined by tweeting it from an iPhone. Lessons about subtlety and authenticity have been learned, which is why nakedly cynical examples are hard to find (a recent music website advertorial called Why I Love Dr Martens boots, written by the ex-pirate radio DJ and Boiler Room favourite Oneman being a notable exception). Yet the oxymoronic nature of the phenomenon – that brands have colonised the world of non-commercial music – doesn’t seem to bother anybody I speak to; instead they say both artists and audiences simply accept the relationship as financially necessary.

That seems logical when you consider the fact that artist-brand partnerships exist in a climate of guilt. Fans listen to artists for free on streaming sites such as Spotify and YouTube, where advertising is a reminder that they aren’t willing to actually buy the music – and that it has to be funded somehow. Yet this complicity is a cause for concern: advertising may not have totally undermined the underground just yet, but it’s certainly reshaping alternative music in its own hollow image.