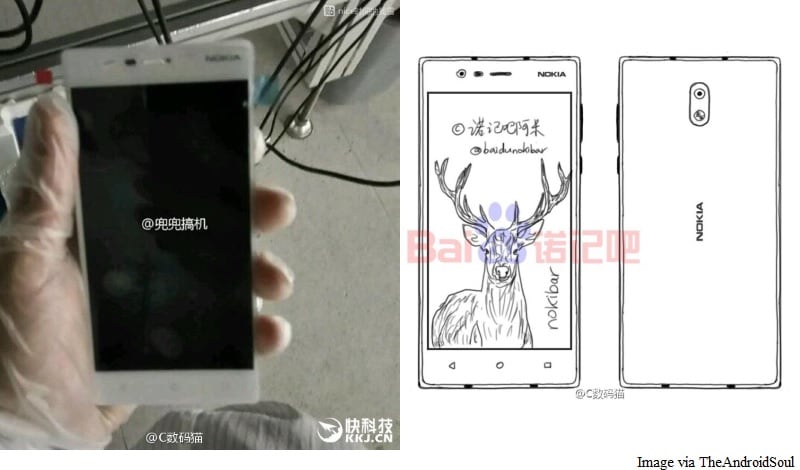 HMD Global, the company that currently holds the rights to develop mobile devices under the brand – Nokia, surprised the mobile industry on Sunday as the company launched its first Nokia branded Android smartphone – Nokia 6. Even though the company was tipped to mark Nokia’s return to smartphone market in 2017, hardly anyone anticipated the comeback to be so soon into the year.

The Nokia 6 smartphone, which was launched exclusively for China, packs a 5.5-inch full-HD display enveloped in 2.5D Gorilla Glass. The phone is powered by the Qualcomm Snapdragon 430 SoC alongside 4GB of RAM and 64GB of internal storage. The dual SIM smartphone houses a 3000mAh non-removable battery. The Nokia 6 has been priced at 1,699 CNY (roughly Rs. 16,750) and will be made available “in early 2017”.

However, an entry-level Nokia smartphone, which was earlier leaked in live images as well as sketches, has now been detailed in new leaks. The specifications leaked about the alleged E1 budget smartphone suggest that it will sport either a 5.2-inch or 5.3-inch display with screen resolution of 720×1280 pixels, as per a report by NokiaPowerUser.

The Nokia E1 is expected to run Android Nougat out-of-the-box and has been tipped to be powered by a 1.4GHz quad-core Snapdragon 425 processor coupled with 2GB of RAM and Adreno 308 GPU.

In terms of optics, the Nokia E1 is expected to pack a 13-megapixel rear camera and a 5-megapixel front shooter. Even though the pricing of the phone has not been leaked as of now, it is expected to be announced by HMD Global at MWC 2017 later next month.