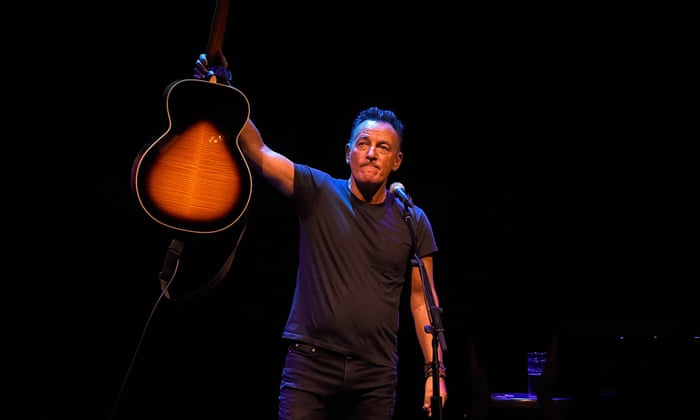 Bruce Springsteen on Broadway, guitar in hand: ‘It was the sword in the stone.’ Photograph: Kevin Mazur/Getty Images

The industry faces threats from changing musical tastes, online commerce, and the instrument’s own durability. But new talent offers hope

Bruce Springsteen stood in a black T-shirt on a Broadway stage and talked about when he first discovered the power of the instrument in his hands.

“The guitar,” Springsteen said, plucking at a Japanese-made Takamine P6N, his favored acoustic. “It was the key, the sword in the stone, the staff of righteousness.

“As my father christened it, ‘that fucking guitar’.”

Within the walls of Manhattan’s Walter Kerr theater, where the musician is now six months into his memoiristic Springsteen on Broadway residency, that instrument, the guitar, is secure in its sacred object status.

But outside in Times Square, the LED news tickers were telling a different story. On Tuesday, Gibson Brands, Inc – with the biggest product line in the guitar business – filed for bankruptcy, succumbing to an estimated $500m debt load and a failed reinvention in 2014 as a “lifestyle brand”.

Troubles in the land of the six-string are not restricted to Gibson. Ten years post-recession, the guitar industry in the US continues to bob, with the 2,633,000 units sold in the United States in 2017 about 5% short of where things stood in 2008, according to Music Trades magazine. The heavyweight retailer on the American scene, Guitar Center, carries $1.6bn in debt.

Take into account adverse cultural and economic trends – changing musical tastes, online commerce, the lure of the smartphone and the eclipse of the guitar hero – and whispers begin to circulate about the guitar being on the way out. Unless it is already dead?

“The demand for guitars has softened – that’s a story in its own right,” Chris Martin IV, CEO of the legendary acoustic guitar maker CF Martin & Co, told the Guardian. “And Gibson was over-leveraged. But please don’t draw the wrong conclusions. Do not conclude that the guitar is dead.

“The guitar’s been around since Mesopotamia, in some way, shape or form.”

The historic durability of the instrument, however, is part of the problem with guitars, from a market perspective. Many musicians prefer used ones to new ones. And it’s never been easier to find the right used guitar.

“The market has softened. It’s not as vibrant as it was in say the early 2000s,” said Brian Majeski, editor of Music Trades. “We think that an enormous factor in that has been the improved availability of used product, and the rise of a generation used to buying things on the internet.”

Reverb.com, an online clearinghouse for musical instruments, will sell between $400m and $500m worth of guitars in 2018, Majeski estimated – “and almost all of them are used”.

The beginning of the end for Gibson was marked by the $135m acquisition in 2014 of an audio and home entertainment business from the Dutch multinational Philips, accompanied by losing forays into consumer electronics – headphones, speakers, DJ products.

“It had nothing to do with the guitar business,” Majeski said of the Gibson bankruptcy. “They bought a consumer electronics business.”

Reckless though it may have been, however, Gibson’s downfall is a jarring moment for music fans who love the guitar, who grew up listening to it, and who care deeply about the tradition it represents.

The company built jazz guitars for Charlie Christian and Bucky Pizzarelli, flat-top acoustics for artists from the Everly Brothers to Sheryl Crow, and the Les Paul electrics wielded by guitar heroes from Jimmy Page to Neil Young to Slash.

While that heterogenous tradition might not be endangered, exactly, it takes up noticeably less cultural bandwidth than it used to, edged aside by software-based pop music, electronic dance music and hip-hop, among other currents.

Displacement in music is a constant global phenomenon, said George Murer, a researcher in ethnomusicology at the City University of New York – and no instrument has benefitted so much from changing tastes as the guitar.

“The guitar has entered the vernacular of so much neo-traditional music, especially north Africa, the Sahara region, even in Azerbaijan, where at weddings when they play traditional Azeri music, electric guitar is incredibly popular,” Murer said.

“Same with the Sahara region, with all the Tuareg and Songhai and south Moroccan Berber and Fulani – the whole range of cultures that have long interacted across the Sahara and had some kind of exchange on the basis of these kind of plucked lutes and fiddles. Now guitar has become the centerpiece of a lot of that repertoire.

“I’m pretty sure that global sales of guitars made by Fender, made by Gibson, must be at an all-time high because guitar music globally is just growing and growing.”

Ed Sheeran to the rescue

Much lamented as guitar sales decline has been the disappearance of the guitar hero – Clapton, Hendrix, Page et alia.

Martin said business for its acoustics goes up when prominent guitar talent – think Taylor Swift or Mumford and Sons in the past decade – steps forward.

“One of the big demand drivers is whenever you have a pop band playing guitars,” he said. “We all take it when we can get it, but the business doesn’t go away when that’s not happening, it just kind of levels out a little bit.”

Happily for the company, Martin devotees include Ed Sheeran, whose signature guitar is manufactured by the company with a list price of $699.

“The nice thing about Ed is that he is appealing to a younger customer,” said Martin. “And the guitar he plays is a very affordable Martin, so the younger customer can kind of go, ‘I can afford one of those’.”

That population of younger customers who represent the next generation of guitar musicians and fans is surprisingly robust, said Phil Schaffart, a tour and production manager who opened Ground Floor Guitar, a boutique instrument retailer, two years ago in Omaha, Nebraska.

“There’s still lots of kids,” he said. “I believe – it’s a little corny for me to talk about it, or maybe it doesn’t make sense or somebody doesn’t feel the same way – but rock and roll is such a real thing in music, it’s like a religion.

“And I think that that is very real, and I see that all the time with young kids coming into our store and getting interested in guitar, both girls and boys.

“The real main thing is putting it in their hands, making them touch it, making them feel it, and making them believe that ‘I can do this’. People get really excited about that.”

Near the end of his show Wednesday night, Springsteen described a recent scene from his life, standing in a kitchen one night with his mother, talking about “all the things that guitar had brought us”.

Then he bent his head, lifted his arm and made it sing.