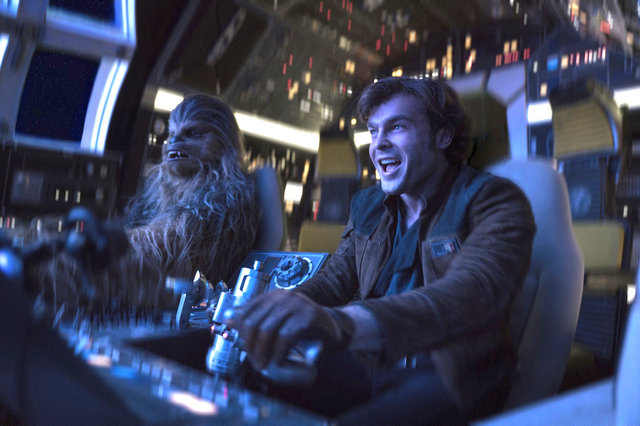 The Star Wars saga famously takes place “a long time ago,” but trying to pinpoint where each movie fits into the overall timeline can be as difficult as making the Kessel Run in less than 12 parsecs. While we’ve known since its inception that Solo, the new anthology film depicting the exploits of a young Han Solo, takes place sometime before the original trilogy, the Ron Howard-directed installment doesn’t offer up any exact dates. Or does it? Let’s find out!

Note: This article contains spoilers for Solo and other Star Wars installments. Proceed with caution. 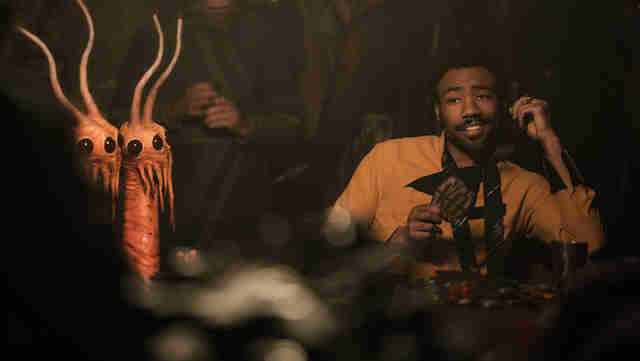 First, we can place the nine previously released Star Wars movies in chronological order by when their main plotlines happen. For now, we won’t worry about exact dates or where Solo fits in.

Next, we can establish dates for these movies in relation to the action in the original Star Wars. In the 1977 classic, Luke Skywalker blows up the Death Star with the help of Han Solo and Princess Leia, and, in the Star Wars canon, that Force-guided feat caps off the Battle of Yavin (named after Yavin 4, the moon where the Rebel base was located) and marks Year 0 in the series timeline. All other events are pegged as either BBY (Before the Battle of Yavin) or ABY (After the Battle of Yavin). For instance, The Empire Strikes Back takes place three years after Star Wars, and is therefore 3 ABY; The Phantom Menace takes place 32 years before the Death Star is destroyed, or 32 BBY. Got it?

Furthermore, Solo must come after Revenge of the Sith (set 19 years — Luke’s age in Star Wars — before the Battle of Yavin), because the Empire is in power and attacking worlds in its post-prequel way, and before Rogue One (which ends with Leia receiving the Death Star plans), because that’s part of the culturally agreed-upon premise of a Han Solo origin story.

Unfortunately, trusting our eyes to peg the age of Han isn’t going to work, and his birth year is never mentioned in the movies. The closest we get is in a Star Warsnovelization that says that Han “couldn’t have been more than” 10 years older than Luke, putting a birthdate estimate at 29 BBY. To narrow it down further, we need to take a look at the surprise character who turns up at the end of the movie.

The only gasp-inducing moment in Solo arrives when Qi’ra contacts the leader of the Crimson Dawn crime syndicate and it is revealed to be Darth Maul, the red-faced double-lightsaber-wielding Darth Sidious associate who, in The Phantom Menace, is sliced in half and presumably killed by Obi-Wan Kenobi. (He’s now known as Maul, though, as he is no longer one of the two living Sith Lords.) He tells Qi’ra to meet him on Dathomir, and that helps make the timeline of Solo a bit less confusing, even as it makes Qi’ra’s character arc much more confusing.

Most people only know Darth Maul from The Phantom Menace, but the villain subsequently popped up on both of the canonical Star Wars animated TV shows, The Clone Wars and Rebels. The former, which takes place between Attack of the Clones and Revenge of the Sith, reintroduces Maul and explains how he survived bisection. In Rebels, he actually confronts Obi-Wan on Tatooine after running across the titular protagonists on a planet called Malachor, and that occurs in 2 BBY. So, Solo has to have taken place sometime between 19 BBY and 2 BBY.

There’s nothing else in Solo that specifically ties it to a particular year, but three canon novels can help narrow down where the movie fits on the official timeline. Tarkin(guess who it follows) is set in 14 BBY, while Thrawn and A New Dawn (both of which tie into the TV series Rebels) both take place in 11 BBY. That narrows the possible window for Solo to three years. Pretty good!

A key to pegging the movie’s date, it turns out, comes from good old Chewbacca, who reveals to Han during the record-setting Kessel Run that he is 190 years old. On top of that, a throwaway reference in the young adult tie-in novel to Chewie being born “180 years before the Clone Wars” provides the missing piece of the puzzle. The Clone Wars is a well-documented time in Star Wars lore, and we know that it started in 22 BBY. If Chewie was 180 when the Clone Wars started and 190 at the time he teams up with Solo, that means the movie most likely takes place in… drumroll, please…12 BBY.

Other sources peg Solo as being set first in 13 BBY (his escape from Corellia) and 10 BBY (the rest of the movie, following the three-year time jump), and that’s possible due rounding errors and approximations. And confirmation is also hard because we still don’t know much about this time in Star Wars history. Regardless, those years should hold important movements in the lives of the protagonists we know from various movies and TV shows. Both Star Wars: Rebels and Rogue One are epic tales about the Rebellion, and the years following the rise of the Empire are when the seeds for rebellion were sown.

Solo: A Star Wars Story is also part of that world-building, even if it’s just filling in a few gaps in an already-completed character arc. But until Han says on-screen just how old he is (or until he has a birthday celebration?), at least the exact age of the man will consistently remain a mystery.