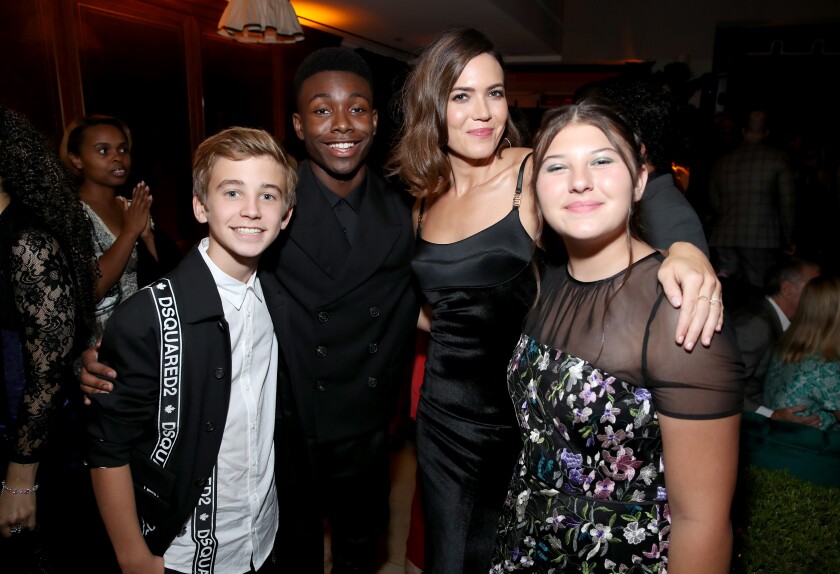 Cameras flashed as Mandy Moore met up with three of her TV children from “This Is Us” — Parker Bates, Niles Fitch and Mackenzie Hancsicsak — after making her way into Sunset Tower Hotel in West Hollywood for Entertainment Weekly’s pre-Emmys soiree.

Not only is Moore one of the show’s seven actors nominated for Emmys — in her case, as lead actress in a drama series — but “This Is Us” is also up for top drama series.

Throughout the evening, stars streamed nonstop into the hotel, crowding onto sofas and spilling out onto the terrace, which offered not only breathing space and relief from the noise level, but also a panoramic view of Los Angeles and surrounding communities.

At the party, there was also a table elaborately set for dinner. However, makeup, courtesy of L’Oréal Paris, the party’s presenting sponsor, was on the plates instead of food.

Outside, Retta of “Parks and Recreation” and “Good Girls” sank into a banquette, and inside, Poppy Montgomery talked of her new show, “Reef Break,” and lamented the end of “Game of Thrones.”

Lead actor nominees Billy Porter of “Pose” and Jared Harris of “Chernobyl” also made the scene, as did lead actress nominee Joey King of “The Act,” supporting actor nominee Asante Blackk of “When They See Us” and guest actress nominee Laverne Cox of “Orange is the New Black.”