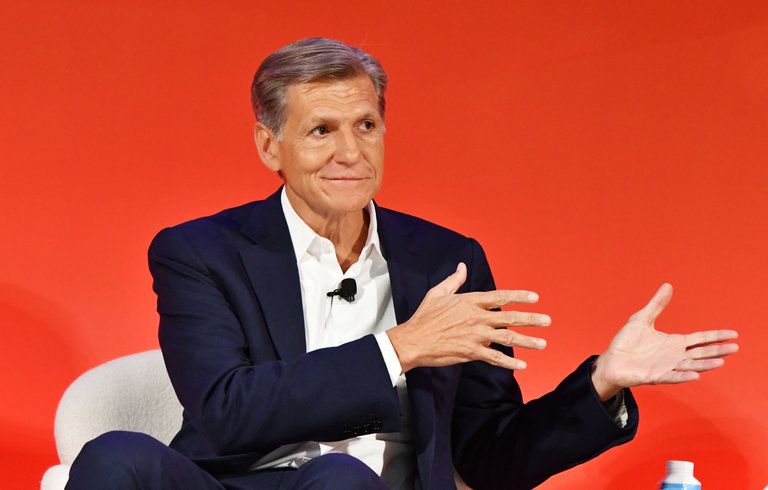 LOS ANGELES — Marc S. Pritchard, the chief brand officer of Procter & Gamble, has become the face of marketers’ frustrations with digital advertising this year. His message to the industry: Grow up.

With the clout that comes with overseeing marketing for one of the world’s largest advertisers — one that includes household brands like Gillette, Tide and Crest — Mr. Pritchard has taken the stage at several industry events since January to demand more transparency and simplicity from the ad agencies and technology companies in regard to how online ad views are measured, how many people see them and with what kind of content they are appearing. Those Mr. Pritchard has criticized include the web giants Facebook and Google, which brands depend on to reach people online.

He reiterated his calls last week at a conference held by the American Association of Advertising Agencies, a trade group known as the 4A’s, criticizing the thousands of low-quality ads that bombard people every day online. With agencies in particular, he called for fewer specialty shops focused on areas like search and video and for them to be more forthcoming with details on their business practices with contracts.

The New York Times talked with Mr. Pritchard during the conference in Los Angeles about the challenges in today’s advertising marketplace. The interview has been edited and condensed for clarity.

What is the biggest problem here?

The entire murky, nontransparent and in some cases fraudulent supply chain is the problem. It’s a bigger problem than just any one thing. There’s too much we don’t know and we don’t have validated.

Ads showing up on objectionable sites, that’s bad. Ads showing up to bots, through searching, that’s bad. Ads that you place that don’t really get measured by a third party that validates what’s right — that’s not so good, either. There’s a number of things in the digital media supply chain — even ads that aren’t viewable or close to viewable.

What will cleaning this up do for you?

What that will enable us all to do is make logical, data-based, reasonable decisions and, most importantly, spend time on what’s really important, which is great creativity to drive growth.

At the basis of this whole point is we’re not growing enough as an industry and the markets aren’t growing enough, so we need to spend time on products and packaging and shopping experiences and advertising to drive growth, and yet we have all this time spent in this opaque media environment. That’s the basis for why we, at least, are poking at this so hard.

How have technology companies, in particular, responded?

There are a lot of people that have come up to us and said thanks for calling this stuff out because we’ve been feeling the same way. It’s a lot of players out there saying we really need to make sure that we know what we’re getting, because at the end of the day, it’s a business. All we’re really asking for is here’s what we’re paying for, validate that we’re getting it, so we can then evaluate whether it’s a good deal. And if it’s two seconds, and it costs X, and lifts the business, we’ll do that. We just need to know that it really was two seconds, and how much it cost and then we can do that.

How does the recent controversy around brands’ ads showing up next to offensive content on YouTube fit into this?

Those are really the kinds of questions everybody’s asking, because what you’re really trying to figure out is, where do you want to focus your money to be able to get the most awareness, the most effectiveness, and with the greatest level of efficiency.

The issues around brands running on offensive websites and YouTube videos seems like a big departure from the days of P & G funding soap operas and family-oriented shows.

The interesting thing about the TV model was that it was free programming paid for by advertisers. I mean, that was it, and radio was the same way. So you get this service for free, but the only price you have to pay is advertising, and that funded it, and that’s essentially what has happened in the digital world.

The digital advertising world brought with it user-generated content, and that’s really the big shift, because before, the programs were created by content producers, and then they were bought by media companies who then put programming together, and then advertisers bought advertising on those programs.

Are marketers looking for metrics beyond impressions to measure online ads? (Impressions are generally counted each time an ad is shown.)

If you think about reach, frequency, impressions — those are proxies for what the real outcome is that you’d like, which is sales. Where we can get a more direct link to sales, that’s actually preferable if we can possibly do that. There are some ways you can do it with data, but the other ways are if you link up with e-commerce, because then you can get much more of a direct outcome. That’s been around for a while but that’s clearly an area I’m sure you’ll see growing.

Do the issues around brand safety online make television more appealing to you?

We’ll certainly tell our brands to look at all alternatives, and it remains to be seen then whether TV will provide the right value, the right measurement, the right proof and evidence that it’s a good buy, it’s a good value.

Many in the industry have been forecasting the death of “interruptive advertising.” Does that mean TV commercials are going to go away?

It’ll all be based on consumer behavior. On TV, people are accustomed to having a commercial interruption. The better networks find ways to make it less interruptive so it’s a better viewing experience. We’re certainly looking for sites where you may have an ad, but it’s not annoying, because you’ve seen this, on some of the ads, pop-ups come, load time takes forever — it’s all that kind of stuff. We’d rather have a better viewing experience and look for those that can do that.

But then there’s some, like the Hulus and Netflix, where they don’t have advertising but we’re still working with them to figure out how we can get at least our brand impressions there. So I think there will be innovations in how advertising is done.

Even if you think about the news feed that occurs with Facebook and even a lot of the YouTube videos, you’re talking two or three seconds. So that has created innovation in how we do advertising … There’s just clever ways where you can do things and get your brand top of mind in a few seconds.

JPMorgan Chase recently told The New York Times it will advertise on only 5,000 websites and 1,000 YouTube channels, all picked by humans. Can you share how many sites and channels P & G runs on?

I’m not ready to go there yet.