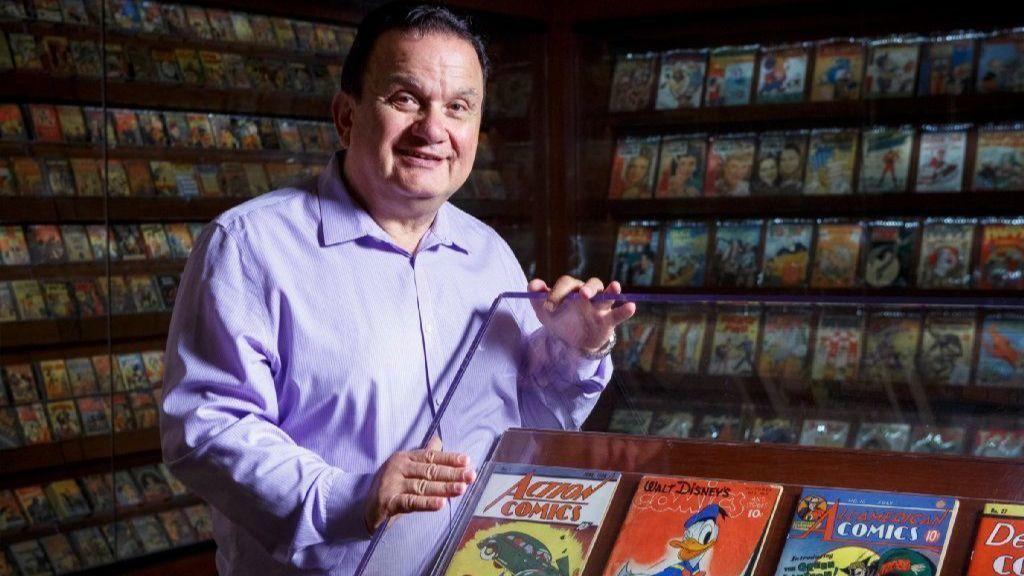 Geppi’s Entertainment Museum will be closing and its collection will be donated to the Library of Congress. (Kim Hairston, Baltimore Sun video)

Geppi’s Entertainment Museum, a pop-culture treasure trove next to Camden Yardssince 2006, will be closing after Sunday, with owner Steve Geppi donating much of his historic collection of memorabilia to the Library of Congress.

“As a Baltimorean, you might think to yourself, ‘We’re losing a museum,’ but Washington’s only 40 miles away — it’s not going very far,” said Geppi, 68, who opened the museum, with its treasure trove of vintage comic books and other pop-culture items, in September 2006 on the second floor of the historic Camden Station.

Although the museum remained open for almost 12 years, Geppi said he was rarely able to attract the crowds he had hoped to see, despite the location next to Oriole Park. “People don’t go there when they go to a ballgame,” he said.

Baltimore doesn’t compare to DC Comics’ fictional lands of Gotham or Metropolis, nor does it hold much weight when compared to the superhero duels that go down in New York City in the Marvel Universe. But Charm City has had some allure with superhumans. Whether they be the powerful villians who grew up here or the real-life illustrators and actors who went on to create diverse heroes and make their stories come alive, here’s a list of superheroes, both in film and comics, with city ties.

The 3,000-plus pieces Geppi will be donating will make up the Stephen A. Geppi Collection of Comics and Graphic Arts, according to a release from the Library of Congress. Parts of the collection will go on exhibit this summer.

Geppi said the collection would be housed in the Library’s Thomas Jefferson Building.

“Do you realize what this might do for pop culture?” Geppi said, noting the respectability — not to mention coolness — factor of putting the first appearances of Spider-Man and Superman on exhibit in the same building that houses copies of historic books. “Side by side, you might see the Gutenberg Bible, the original art for ‘Amazing Fantasy #15’ and ‘Action Comics #1.’”

“What I found so amazing about the collection, the material that’s on offer, is the fact that it’s so diverse,” said Georgia Higley, head of the library’s newspaper section and curator of the comic book collection. “You kind of get an idea of the interconnections of popular culture, which that collection demonstrates really well.”

The museum’s closure will leave the former B&O Railroad station, which dates to the 1850s, empty. The Sports Legends Museum, which had occupied the building’s first floor, left in 2015, after being unable to reach a new lease agreement with the Maryland Stadium Authority.

“Conversations are ongoing” about plans for the space, said Rachelina Bonacci, a spokeswoman for the authority, declining to reveal specifics. “We want to put in something that will enhance the fan experience” for people attending ballgames at Oriole Park or nearby M&T Bank Stadium, she said.

Finding an appropriate business for the site presents special challenges, said Michael Evitts, spokesman for the Downtown Partnership. “It offers some enticements and amenities you’re not going to find anywhere else,” he said, including access to mass transit and parking. “On game days, you’ve got some of the best visibility anywhere. But the rest of the year …” there is considerably less foot traffic.

The Library of Congress is getting one of the premier collections of its kind, said Arnold T. Blumberg, a former curator at Geppi’s museum who has taught courses in popular culture at the University of Baltimore and the University of Maryland, Baltimore County.

“Steve spent the majority of his career and personal life acquiring a great deal of this material,” he said. “We weren’t really aware of any other personal collection of that scope anywhere in the world.”

One of the collection’s showpieces — and one that Geppi never exhibited in his museum — is a set of six storyboards for 1928’s “Plane Crazy,” the first Mickey Mouse cartoon produced by Walt Disney (“Steamboat Willie,” the first Mickey Mouse cartoon released, was actually produced later). The pencil sketches are a little rough and time-worn, but there’s no mistaking that mouse for anyone else.

Geppi obtained the “Plane Crazy” sketches from the estate of an early Disney publicist through a New York gallery in the mid-1990s. He donated it to Boca Raton’s International Museum of Cartoon Art in 1995, then had to buy it back after the museum folded in 2002; in total, Geppi said he paid “in excess of seven figures” for the drawings by Disney animator Ub Iwerks.

Having a collection like this available to the public can help bring the study of culture and history alive, Blumberg said. That’s particularly true when it’s in Washington, already a magnet for students and tourists, and is available to be seen for free at such a well-known venue as the Library of Congress. And it can only enhance comics’ growing reputation as a medium worthy of preservation and study.

“To demonstrate the history, really, of American culture in general, through these comic characters we grew up with — I don’t know of any other place that uses them in that way,” Blumberg said. “The idea that all this material is going to the Library of Congress and will be available for people to see and to utilize in academic pursuits … I think it’s a wonderful step forward.”

Geppi credited Librarian of Congress Carla Hayden, a former head of the Enoch Pratt Free Library who still lives in Baltimore, with playing a large role in finding his collection a new home. He said he began discussing the possible donation with her about a year ago.

“Carla is going to be a transforming person for the Library of Congress,” Geppi said. “She is putting her mark on this.”

Hayden, who is traveling, said in a statement that Geppi’s collected works “are amazing treasures Maryland residents have enjoyed for more than a decade. Steve’s generosity will allow for these priceless memorabilia to be shared with all Americans at the Library of Congress.”

A native of Little Italy, Geppi has been collecting comic books since he was a kid. In 1974, he opened one of the area’s first comic book stores, Geppi’s Comic World, in the basement of an Edmondson Avenue house. In 1982, he founded Diamond Comic Distributors, which soon became the country’s largest comic-book distributor. He purchased Baltimore magazine in November 1994, and publishes comics and comics-related books through another company, Gemstone Publishing.

Higley said adding such a large collection of popular items should help people understand the breadth of the Library of Congress’ holdings — that it’s not restricted to literature and academia.

“This collection fits in rather nicely with our efforts to promote the library’s collection as a whole,” she said. “Everybody loves popular culture and the comic books and the movies and the TV [shows]. It captures people’s eyes. Comic books are not the first things that you think of when you think of the Library of Congress. It’s a way of getting people to think about what’s in the national library.”