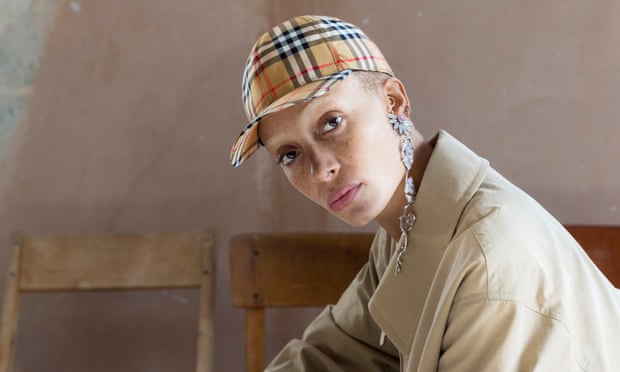 Adwoa Aboah is both the poster girl for modern fashion and one of its most vocal critics. The 25-year-old model, who walked the Burberry catwalk on Saturday and Donatella Versace’s Versus show on Sunday, leads discussions around issues from imagery of black women in the media to the impact of social media’s hyperphotogenic visual culture on self esteem on Gurls Talk, the online platform she founded which now has 100,000 Instagram followers.

At London fashion week, real talk is the new air-kissing. The rise of Aboah, recently named a contributing editor at Edward Enninful’s British Vogue and GQ’s Woman of the Year, symbolises an unexpected taste for candour which is emerging in an industry long built on the pursuit of unattainable perfection.

The Burberry catwalk, not so long ago bedazzled with flashbulb-friendly glitter showers, had a gritty makeover this season. The venue – an 18th-century courthouse in Clerkenwell where the underground cells, it is said, are linked by tunnel to the Old Bailey – hosts an exhibition of British social portraiture photography. Ian Macdonald’s images of Yorkshire workers in the early years of Thatcher, Jo Spence’s pictures of the 1970s traveller community and Charlie Phillips’s portraits of mixed-race couples in 1960s Notting Hill served as the backdrop to Burberry’s latest collection.

Fashion does not usually acknowledge, let alone celebrate, the side of British life seen in the Here We Are exhibition. In a Clerkenwell pub, two dishevelled young lovers are captured tenderly snogging over their half-drunk pints. Belfast schoolboys in garish nylon sweaters puff their chests with pride for Alasdair McLellan’s gleaming portraits. Burberry has long mined British culture for inspiration, but the points of reference have until now been highbrow and rarified. Collections have referenced the Bloomsbury group, military costumes, the painters David Hockney and Lucian Freud. Advertising campaigns have starred high-cheekboned aristocrats: both the literal kind, such as Lord Frederick Windsor, and the 21st-century equivalent, Romeo Beckham.

Fifteen years after Christopher Bailey began the painstaking task of decontaminating the Burberry brand after the Daniella Westbrook years, steeping the house in upper-class bohemian imagery in order to obliterate the folk memory of football terraces and baseball caps, the brand is ready to embrace its streetwear heritage once again. The new Burberry collection includes a baseball cap and shiny anorak, both printed all over with the house check. Adwoa Aboah wears both on the cover of the latest issue of Dazed magazine.

That streetwear is currently both the most cutting edge and the most lucrative branch of fashion perhaps played a role in this change of heart. The cult Russian streetwear designer Gosha , with whom Burberry recently collaborated for a collection shown in St Petersburg, Rubchinskiy sat front row at Saturday’s show. Christopher Bailey, who recently said that he had “never been snotty” about the brand’s history as part of working-class culture, described the photography in Here We Are, which will be open to the public for two weeks, as having a spirit “sometimes ironic, sometimes tender, always truthful … that has guided our September collection”.

A fur ban is already implemented by many department stores and magazines. The BFC position currently is that it “does not dictate what designers can or cannot design and has no control over their creative process. We encourage designers to ensure that if they choose to work with fur, they work with reputable organisations that supply ethically sourced fur.”