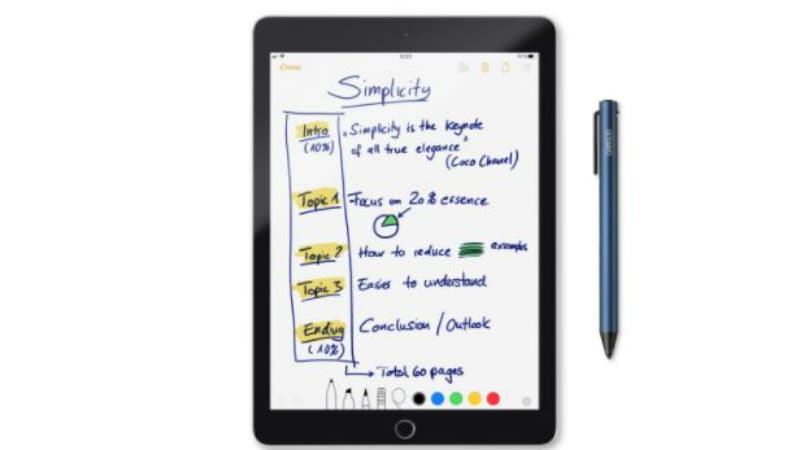 Accessory maker Wacom on Tuesday announced the launch of the new Bamboo Tip fine-tip stylus for Android and iOS devices. The stylus has been designed for Android phones/ tablets, iPhone, and iPad. It enables switching between devices without pairing. The Bamboo Tip stylus comes with a claimed 20-hour battery life. It has been priced at $49.95 (roughly Rs. 3,200) in the US, EUR 59.90 (roughly Rs. 4,700) in European markets, and JPY 6,280 (roughly Rs. 3,600) in Japan.

The Bamboo Tip comes integrated with Wacom’s proprietary Inkspace, a cloud based service that offers access and synchronisation for notes and other sketches. The fine-tip stylus has an anodised aluminium casing in a Dark Blue colour variant. It conserves battery life by turning off within a few minutes of standby time; users can also switch it off by pressing the button provided.

Yet another switch on top of the Bamboo Tip allows users to fine tune performance by changing frequency based on custom preferences.

The highlight feature of the Wacom Bamboo Tip is the ability to switch between Android and iOS devices without the need of pairing and unpairing repeatedly.

The Wacom Bamboo Tip has a length of 142mm and minimum diameter of 10mm. Weight of the stylus is 16 grams. It comes with a Micro-USB charging port hidden behind the cover on the top. It also comes with Bluetooth connectivity. “Bamboo Tip works best on screens without one (screen protector),” according to the product page.

“In today’s connected world, we rely on a combination of smartphones, tablets and different operating systems to capture ideas, observations and next steps at work or at play. Bamboo Tip lets users move seamlessly between devices and operating systems to get things done. As OS providers roll out more seamless note taking and markup capabilities on their devices, Bamboo Tip will help users take full advantage to be more productive and turn ideas into reality,” said Mike Gay, Senior Vice President of the Wacom Consumer Business Unit.

[“Source-gadgets.ndtv”]
allows and Android Bamboo Devices for iOS on Pairing Seamless Stylus Tip Wacom 2018-01-24
Loknath Das
to in With for and of on India The Launched at Samsung Launch A iPhone Android Galaxy More Apple Rs New Be 7 Price Google